This was a typed written letter that was found in the offices of the Camden-Wyoming Fire Company. It had no date or author. The letter is possibly circa: 1930's

On August 20,1890, the Lakeview Hook and Ladder Company was organized in the town of Wyoming, Kent County, Delaware, by the citizens in cooperation with the town council. J.V. McCommons was elected President; W.G. Simmons, Secretary and Treasurer; M.R. Jenkins, Chief. A small hook and ladder truck was purchased, along with additional equipment, consisting of some hand fire extinguishers, buckets, etc., with a bond issue of $400.00. A small shed was erected on one side of Mr. McCommons canning house (which is still standing) to place the apparatus.

In 1906 the town commissioners authorized to be erected, the present building, known as the Wyoming Fire House and Council Rooms, which is small but very nicely equipped, and the present equipment consists of three hose carts with 500 feet each of high pressure fire hose and a new modern hook and ladder truck. In the tower of the building there is a three horsepower electronically operated siren for fire alarms, to call together a well organized fire company.

The department is known as the Wyoming Fire Company, the name being changed in 1916. The town of Wyoming has a complete water and sewer system, with 60 modern fire plugs with pressure of 40 pounds.

On June 10,1884, there was a disastrous fire in Camden. The canning factory, which was our leading industry, a store and two dwellings were consumed. The citizens saw the necessity of more adequate protection and the Rescue Hook and Ladder Company was organized.

It was incorporated by the Legislature on February 4,1865 with 21 members, of whom only four can now answer the bell call.

Private subscriptions, with some town aid, were made for an amount sufficient to purchase a truck, ladders, buckets, axes, hooks, speaking trumpets, and other equipment for fighting fire, helmets, and uniforms for the firemen. When all was complete, we were of the opinion "It was very good."

About 15 years later, additional equipment in the way of a truck; tank and pump was purchased, which if supplied with water and manpower with a hose, could force water upon the top of any building in town.

These were our appliances until the present water system was installed, which with fire plugs and 400 feet of hose, affords protection to all properties in the town.

After the reorganization of the Wyoming Fire Company in 1916, the old Rescue Hook and Ladder Company in Camden also started a reorganization campaign, but were only active until the spring of 1927, when the Wyoming-Camden Carnival Commission was organized, with J.E. Haddaway, Chairman, E.H. Tubbs, Secretary, Edgar Stubbs, Treasurer, S.J. Speal and M.R. Jenkins, Directors. After the first carnival was held that summer, which was quite a success financially, the organization of the two companies was consolidated into one unit called the Camden-Wyoming Fire Company. This was September of 1917.

During the spring of 1928, an American-LaFrance, 500 G.P.M. pumper was purchased. Since then they have equipped themselves with all modern appliance for fire-fighting. The Pumper and auxiliaries are housed in the old Town Hall in Camden, which has been remodeled to take care of the equipment and social activities of the two-in-one fire fighting unit.

Photo of the Day 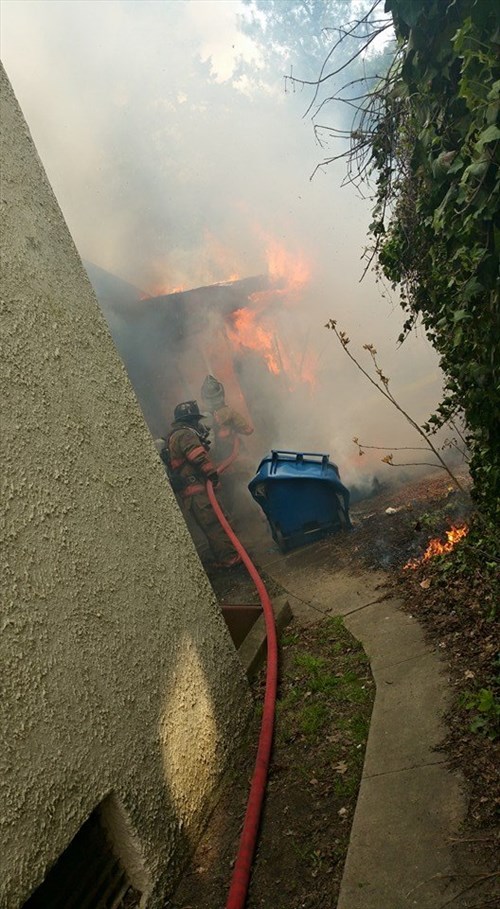 Make a donation to the Camden-Wyoming Fire Company and help us to continue helping our community!